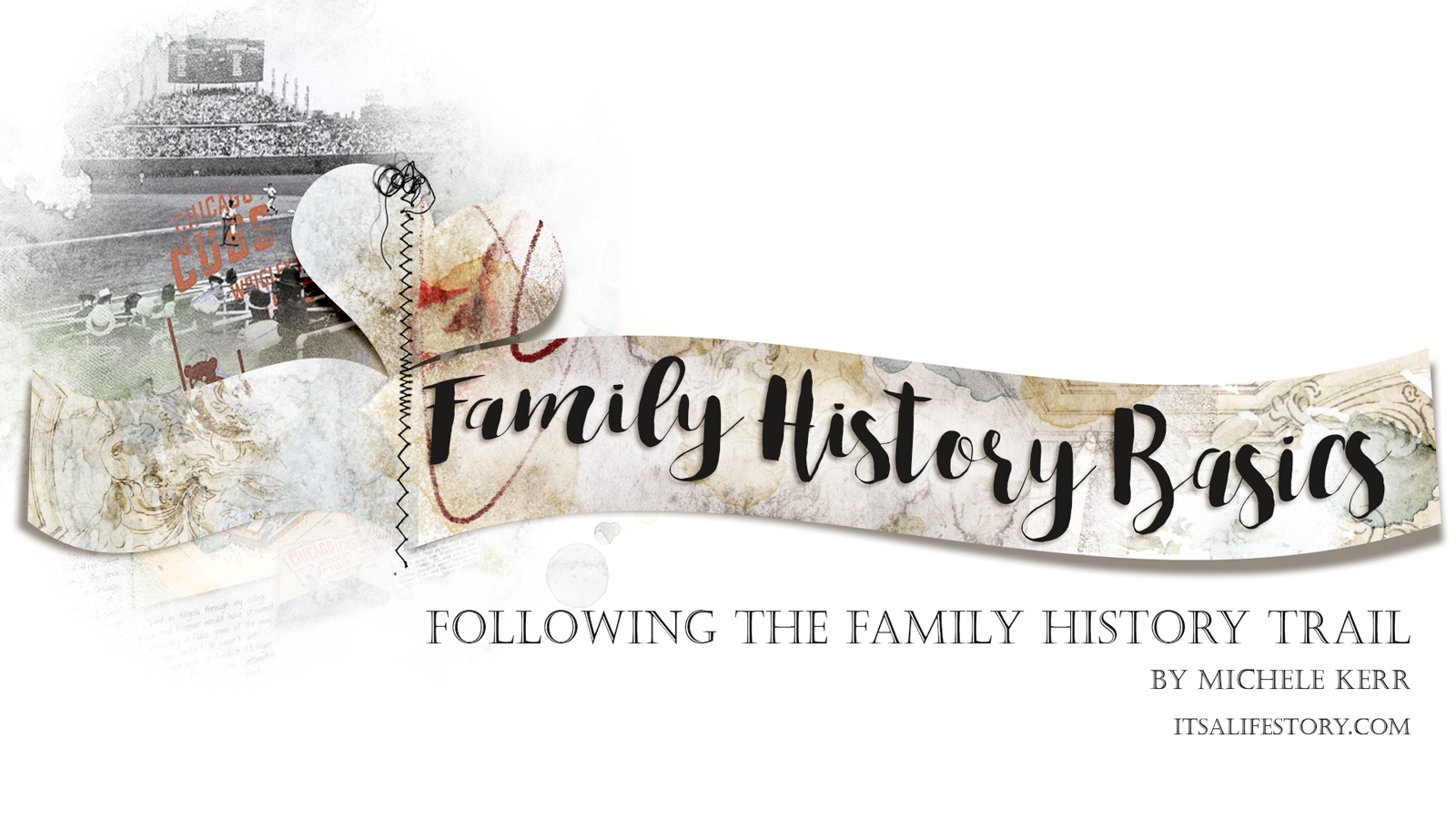 A person’s own family is without doubt, the greatest wealth we will ever possess

Back in July, I mentioned in the “Finding the Calm in Big Projects” article that I am using Microsoft OneNote to pull my LifeStory book together on my paternal grandparents. I am purposely slowing down my research process and focusing on the small details that I find.

So, on the subject of details, I have to laugh because I just completed a 2-page layout covering a 1938 baseball game that my grandfather apparently attended – all coming from a one line note that I found in the local news section of my grandfather’s local newspaper. It mentioned that he saw a “most exciting game between the Chicago Cubs and Pittsburg Pirates” and also gave me some idea of when he had attended.

This is where, living in this particular time with availability to Google Searches, I was able to look up the 1938 Chicago Cubs’ schedule and yes, and I did find that they indeed played the Pittsburg Pirates for a 3-game stretch during that time. I love to see searching for one thing lead to another and then another. That’s the permission I gave myself this time around and it has been such a good thing.

That little game that my grandpa attended? It ended with a homer by the Cubs in almost complete darkness, because Wrigley Field didn’t have lighting until 1988, and it became known as the “Homer in the Gloamin.” According to Wikipedia, it is “one of the most famous home runs in baseball folklore” and the name was given because of a popular song with the same title. This song was, “written and recorded [in 1911] by Harry Lauder. “Gloaming” is a regional dialect term of Scots origin denoting “twilight.” Writers tied the twilight timing of the homer together with this song and “Homer in the Gloamin” stuck.

Now folks, where can you make up this kind of a great story? Would I even know about such a story unless I had gone looking? Definitely not. My knowledge of baseball is pretty limited. Very limited. But here I am with a fascinating story of an event that my grandpa attended. Initially, I was going to just mention it in passing in one of my other articles because my grandfather does get back to Chicago later in life in a different capacity, but now it has its own layout and story behind that tiny little newspaper clipping.

I know I’ve been hitting the newspaper end of my research hard over the past couple of articles, but I just can’t tell you how much fun it is to find these little tidbits and then see what kind of story I can locate around them. Here, all these years, I’ve been feeling a bit forlorned because my family just doesn’t have massive amounts of heirloom items that have been passed down through the generations. I’ve been to many historical, reconstructed homes for important people, including some Presidents, on tours and just always left feeling wistful and wishing that my family had been a little bit more collective of their furniture, jewelry or what-nots.

But here’s what I’ve discovered from this recent project: I have had priceless bits of history and stories handed down to me. I just didn’t realize it. I had to do some work on my own to discover it all, which in my book, almost makes it more special to me. How many times have you heard that we take things for granted when we are given so much, but when we work hard for what we receive, we treasure it sometimes even more? (If you are a recipient of lots of wonderful heirloom items, I’m not saying you don’t appreciate it, I’m just saying that if you appreciate it already, imagine if you were to look for even more background information. Oh, the stories you might still have waiting to be found!)

Background information. Don’t we all love background papers? They set the stage for our layouts and determine the direction of tone. Well, those little bits of background that we search for with our family history is really the nugget of gold in my article this month. Take time. Slow down and enjoy the process!

Fine-tuning my own workflow

That July article that I mentioned at the beginning, is the same one that I shared a part of my writing workflow using Microsoft’s OneNote, but as I continue to work through this project, I’ve realized that I do a few other certain things that have allowed me to keep progressing forward. Since I can finally see the end of this project for my paternal grandparents, I think it is a good time to share some strategies that have been working well for me and maybe they can be helpful to you as well.

Over the next several months I’m going to share how I use file folders and OneNote together as a system to keep that calm going, even through the layout process. Diving into our family’s history can get overwhelming and I encourage you to keep breaking it down into small sections.

With that in mind, we can also become overwhelmed due to how we are organizing our documentation and our scrapbooking digital stash. (I use the term “stash” lovingly, but I think we all could agree that it can get even more out of control than the paper stashes that we (me in particular) can and do (or did) accumulate. So, I hope you come along with me as we continue on this journey of mine and I’d love to hear how you are all doing on your own LifeStory projects. 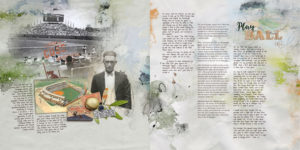 Since I literally only have photos of my grandfather that date to around 1927-ish when my father was born or later around 1945-ish, I had to use what I had and selected a strategic section of my grandpa’s photo to use in my layout. I think that adding a photo, even if it isn’t the correct date, helps to tie my grandfather to the story. As I pulled together the items to use in my layout, I knew I wanted to use a background with some blue, some green and a little bit of orange. Thankfully, Anna Aspnes’ Heath Palette fit the bill and gave me the green for the baseball field and blue for sky. Perfect! My orange-y items would be the dash of extra color from my added items along with some colored brushes to help the layout flow from one side to the other. And what good fortune to find a leaf from the mini palette Eutaxy, with a little hue tweaking, gave me a little element and a splash of orange. Oh, my gosh… Listen to me. I sound like it was so well thought out, but it was really playing around until I found the right fit.

Blending is the secret sauce to Anna’s layout recipe and it has been such great timing to have the Champions course recently devoted to blending. If you haven’t ever tried to use blending or brushes, it has been the magic for my LifeStory project.

Note:  I have been posting monthly heritage articles for Scrapaneers since December 2016 and this article originally appeared September 27th, 2019, on The Scrapaneers’ Society website in a series titled “Family History Basics.”  My articles are meant to encourage us all to get our own LifeStories written down and I’ve been given permission to repost them here on my own website. If you are interested in learning more about digital scrapbooking, The Scrapaneers’ Society has wonderful classes available from beginner to advanced.