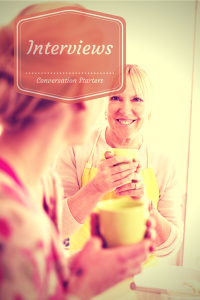 I started out casually browsing through my Twitter feed and came across a tweet that took me to an article posted on Crestleaf.com’s Blog titled, “Breaking Genealogical Stereotypes: Interview with D. Joshua Taylor.” You can find the entire interview here.

I have listened to quite a few talks by Mr. Taylor and of course have been watching him on Genealogy Roadshow so it caught my attention. In the article, Crestleaf asks what is important when interviewing relatives.

D. Joshua Taylor responds that you ask the person:

These are three wonderful interview questions and ones that we all need to jump on sooner than later. While I am still a newbie at Twitter, even though I have had an account since it started, I responded back with this:

“Thanks goodness I took the opportunity to interview as many of my elderly relatives early on. They’re all gone.”

Now, staying away from judging my tweet for its brilliance or lack of, this short couple of statements stopped me for a moment after I hit “send.” You see, I had make the attempt to talk to all my elders and my husband’s older family members several years ago – within the past fourteen years. Why specifically “fourteen?” That’s easy. My mother passed away from non-hodgkins lymphoma in 2000.

Suddenly, she was gone. Way before that we had even had discussions on what she might do if she outlived my father. And now my mom was the one that was gone. Always planning on having her around until she was past her eighties, she was gone at age 70. With her went all the stories of her past that I vaguely knew about but never had asked specifics.

I’m terribly sorry to be such a downer in this writing, but sometimes it takes a shocker like loosing a parent to jolt you into action. Lots of good came from this loss of my mother  because in a way, I might not have thought too much about trying to interview all my relatives. What’s funny is that I probably wouldn’t be in the position that I am today with my family history research if she had lived a long life. I wouldn’t have felt the need to get those interviews.

What would I have missed? My great-aunt on my father’s side described both of her grandfathers and gave me quite a few details about her own father, my great-grandfather. I would have never had these details by simply searching through records and books. They wouldn’t have told me that all four generations of Julian men, including my father, were very focused on work. They worked long hours to the point that family time was cut short, but they all felt a great need to push themselves to finish what was at hand. They needed to get the job done.

Of course I knew this about my father, but after talking with her, it all suddenly made sense. And it made even more sense when I looked at myself and my brother with this knowledge. What I had held as a slight grudge against my father for always working, became something that was bigger than him – it was “in his DNA” as you might say.

Lots of other priceless stories came from these interviews, too many to tell all at once. But the striking thing about this is that they are all GONE. Every last one of them has passed away. Can we take the chance to not get the family stories written down somewhere for the future?

Finding out about your family’s history and their stories, gives you a foundation to live on.

So, my advice this time is to not fret about getting all the questions answered at once from your older family members. As Nike says, “Just Do It!”