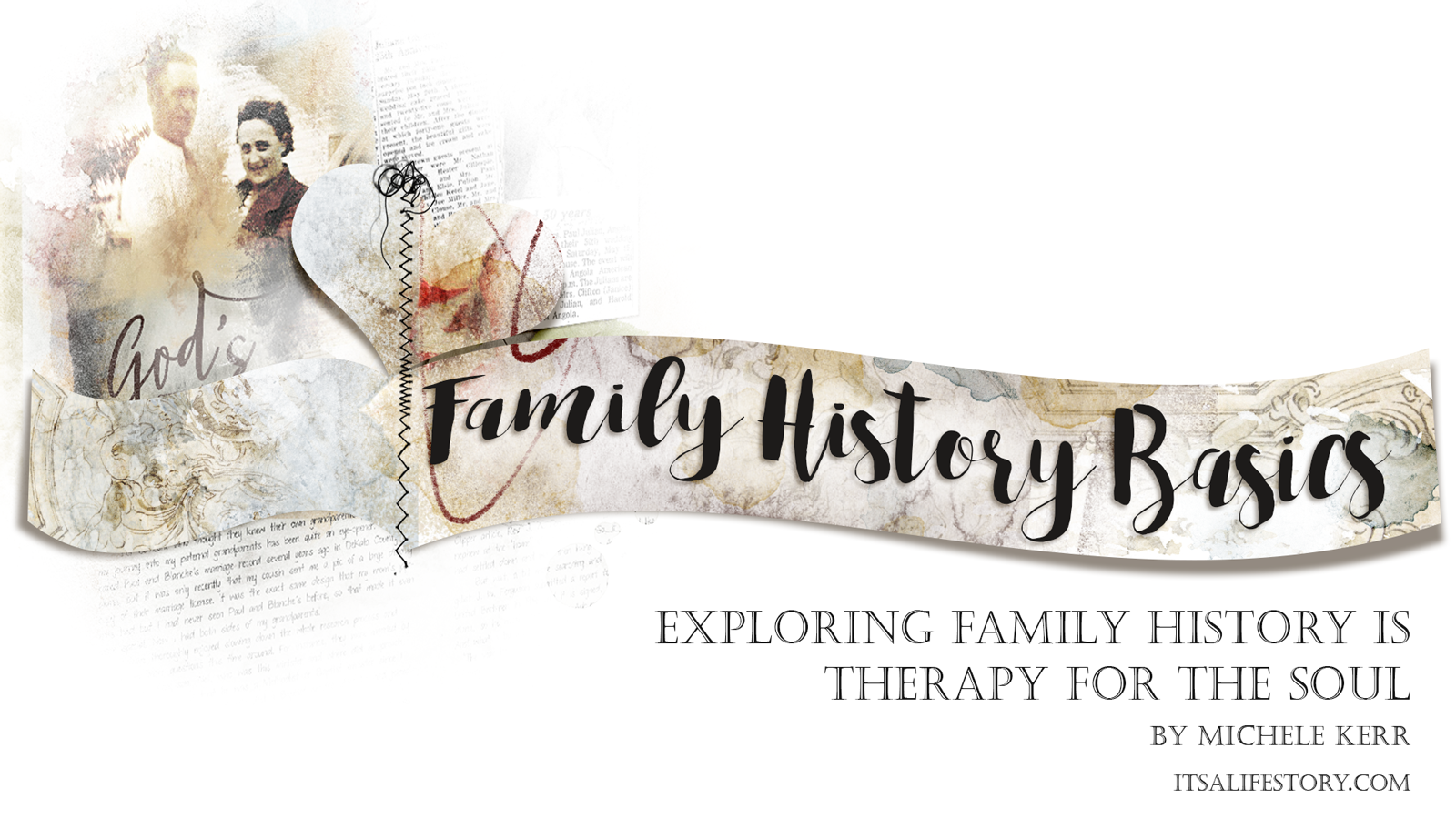 “Exploring Family History is Therapy for the Soul” – Michele Kerr 2019

Last month I shared with you that I had come to terms with knowing that my family’s LifeStory books were being done very selfishly for myself. What I didn’t really comprehend at the time was that this whole slowing-down-the-process was leading me to a deeper understanding of who I am right now. To be more exact, it helped me to better understand my own dad and in turn, it also helped me to see something in myself which I think will help me to be a better person, and more importantly, a better mom and wife.  That’s the golden nugget you receive when you look into your family’s history — it helps you to really cement your own foundation and then move forward with confidence.

A couple of weeks ago, I took a weekend to explore once again into online newspapers in the two hometowns of my paternal grandparents. I didn’t actually intend to make it an entire weekend, but it was a bit like picking at some wallpaper and then you know that the entire wall needs to come down!

I have to call it an adventure because it was quite a wild ride for me. That weekend was all about my grandparents but as I continued to find new articles containing new revelations, I was also coming to terms with things that I didn’t even realize had been bothering me since my childhood.

I don’t want to paint a sob-story to get anyone’s sympathy, because honestly, I didn’t realize anything should have been different as a young girl. But growing up having my own family and gaining knowledge on how other families worked, I began to realize there had been a void in my life that hurt me more than I ever realized.

I knew that my dad loved me fiercely and would do anything in the world for me, but he just never had time to be involved at all. Nothing outside of the home for sure and I accepted it at the time because I didn’t know any different. It wasn’t until my mom passed away and a couple of years later he finally shut down his 50+ year-old business, that he really began to carve out time to be with us and enjoy his grandchildren. That was huge and I loved every minute of it.

Understanding is the First Step

How does this all tie into my grandpa’s newsy articles that I found that weekend? It feels like I understand my dad one-thousand-percent more now. His passion for his work was in his DNA, his genes. He literally couldn’t help himself. It wasn’t that he wasn’t interested in spending time with his family, but I now feel like it was that drive to continue-until-the-job-was-done and then start-all-over-again spirit that he had.

To my surprise, that’s what his own dad had done… over and over again. I always thought that he had been very lucky to have gotten through the Great Depression in the 1930’s and that it had to do with him being a farmer. Well, now I know the rest of the story and a great story it was. The newspaper articles showed me one after another how he had kept evolving to keep his family secure in a time when family financial security was fragile at best.

Things Start to Come Together

My great-aunt Mable had told me that my dad’s intense drive to work came from his dad and his dad’s dad (her father) and now it completely makes sense. I saw that same drive in my brother, Randy, as he worked so hard for so many years. And his need to add equipment? Well, that seems like a stretch to say it was in his genes as well, but really? Paul, my grandpa, did the same thing. My dad, Max, did the same thing and it would drive my mom nuts to always be in debt. I have no idea if Paul was always in the same type of debt or if his father was, but they surely all had that same drive to keep mixing things up and seem to be always on the lookout for the next thing — all in hopes of keeping their family secure.

Making Sense of it All

And that brings it full circle to me because I can look in at myself and see remnants of that drive to finish a project. My projects might be on a computer, but I do get that ever-present need to get my work finished so I can move on to the next thing. And there is always a next thing. I didn’t go into this weekend-long newspaper research binge thinking that I would come out knowing my grandpa, my dad, and even myself better, but it has filled in some of those gaps and given me a renewed love and appreciation for my parents, grandparents and generations beyond.

My quote that I made at the top? If you doubt me, then maybe you should try it for yourself and then let’s chat! 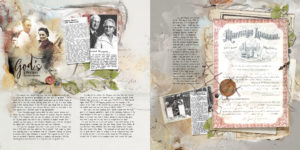 The beauty of pulling the photos, documents and stories all together into one layout is that I get to give the future reader lots of things to linger over when they look through the book. I’m hoping that whenever someone picks the book up for their 2nd time, they find something new that they hadn’t noticed before.

I used the Mini-palette Momentos from Anna Aspnes Designs for this layout and some filler paper items behind the marriage license from one of her multimedia document files. Since I do not have any wedding photos of my grandparents, I blended two separate photos of each of them holding a new baby (grandpa holding my dad and grandma holding my aunt) and thought that it would represent them as close to their marriage year as I would get.

When I finished the spread and stepped back to look at it, I had to just smile with enjoyment because pairing the early photos next to their 50th wedding anniversary newspaper photo seemed perfect. I wish I could take credit for thinking of that beforehand, but that is what I like to call scrapbooking magic!

A Research Tip for Working in Online Newspapers?

Look for new avenues. Don’t stop at researching just the terms that you are familiar with. In my research that weekend, I was looking for “dump trucks” when it turns out that most likely there were called “drays” in the early 1920’s. My grandfather drove a school bus from 1921-1922 but they were called “school hacks” at that time. The magic came from finding those new terms and then starting to research in the newspapers using those terms. Lots of new articles showed up and they all helped to paint a better picture! And also, play around with spellings because if you only search for “Paul Julian”, you will miss “P. Julian” or “Mr. and Mrs. Julian.”